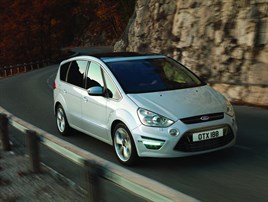 Ford's all-new C-segment offering has made its European debut at the Geneva Motor Show, alongside final versions of C-MAX and Grand C-MAX which go on sale this year.

At Geneva, the interior of the five-seat C-MAX is revealed for the first time. It features a coupe-like, sweeping roofline which falls off to the rear, but without compromising the comfort and practicality of the vehicle.

The seven-seat model features a higher roofline and thinner pillars which emphasise the generous room and visibility on offer within the cabin.

The all-new C-MAX cockpit will represent the next generation of Ford's human machine interface (HMI) system. The key elements of this technology are two five-way toggle switches on the steering wheel, which control two main vehicle displays: one in the instrument cluster and the second mounted in a high position in the centre console. This simple, intuitive control system enables the driver to operate the key vehicle features while keeping both hands on the wheel, and with a minimum of distraction.