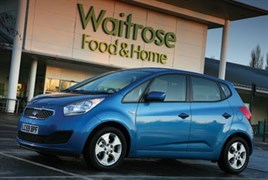 Following EuroNCAP's warning for all customers of the 2010 Kia Venga to have a safety modification carried out, Kia has confirmed that all UK cars have now been rectified.

During recent tests, EuroNCAP identified a weakness in the restraint system
of the Venga that requires immediate attention.

In the UK, there were just four cars already out with customers and these have all had the modification carried out.

Euro NCAP discovered a cut in the webbing of the seat-belt on the driver’s side
following the frontal impact crash test.

Euro NCAP inspectors concluded that the seatbelt was damaged by interaction with the seat runners when it was under load from the dummy.

Kia has produced a polypropylene sleeve to be added to the seat belt as an effective countermeasure to the problem.

According to Kia, some 1,161 cars were were affected and all have now had the safety modification work carried out.

Euro NCAP advises all customers that the star rating awarded to the car can only apply following the fitment of this safety modification.