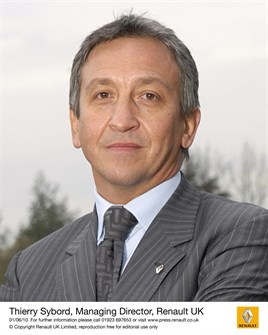 Speaking about his tenure, including the challenges and successes during the recent economic downturn, Roland Bouchara said, "My promotion is a result of the success our subsidiary has achieved in a very difficult economic environment. I would like to pay full tribute to the effort and contribution that all of our UK staff and dealers have put into the Renault Network Regeneration Plan which we launched in 2007 and, recently, the Destination 5 programme, which has resulted in us becoming the fifth placed brand as well as possessing a profitable dealer network. Clearly in my new role, this country will remain crucial to our European ambitions, so I will not lose touch and will always hold fond memories of my time here."

Taking up the mantle of leading Renault in the UK, will be Thierry Sybord, currently managing director of Renault Netherlands.

Thierry, 47, has been responsible for Renault Netherlands since 1st July 2006, having previously held senior roles including marketing director for France.
Commenting on his imminent arrival in the UK, Thierry Sybord, added, "Naturally, I'm delighted to be taking on the challenge of orchestrating Renault's operations in the UK.

With an impressive market share increase this year, one of the youngest car and van ranges in the industry and our innovative range of electric vehicles just on the horizon, it's an exciting time to be joining."