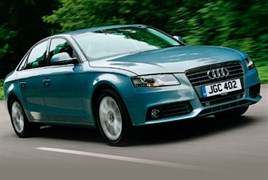 Audi makes cars that fleet drivers want - it won Fleet News awards this year for its A4 and A3 models.

But 2010 is shaping up to be a challenging year and Audi’s head of fleet sales Iain Carmichael will be happy if sales remain static.

At a time when many manufacturers are looking to grow fleet sales to help compensate for the expected drop in retail sales, Audi is taking a different view.

“My target this year is to deliver a similar level of volume as 2009,” says Carmichael.

Despite his cautious approach, Audi fleet sales made a flying start to the year, in line with the rest of the automotive industry.

“It has been particularly strong in the corporate channel, which is the core of what we do,” says Carmichael.

“Customers want to drive Audis, the majority want to fund Audis and most will do that through the contract hire and leasing industry.”

Audi’s strength is in its desirability among user-chooser drivers.

“The driver, for us, is the critical person. We don’t sell in bulk – the majority of our cars go to user-choosers who order it through their contract hire company.”

This strength in the user-chooser market makes Carmichael’s plan not to grow sales in rental and Motability believable.

Audi is one of those marques that fleet sales directors at the volume manufacturers must envy.

It makes aspirational cars, which gives it an advantage over volume carmakers that chase market share by pushing cars into short-term rental and Motability rather than directing sales to user-choosers.

Audi puts just 3% of its total volume – or 3,000 cars a year – into rental fleets, almost all on buy back thus guaranteeing its dealers a supply of quality used cars, typically seven months old with between 12,000 and 14,000 miles on the clock.

“That 3% is the highest level I will go to,” says Carmichael.

Motability, which often requires significant manufacturer support, gets just a handful – between 200 and 500 – of Audi cars a year.

“Motability requires a factor of support,” says Carmichael. “And that’s not what we are about.”

There is one area of fleet sales that Audi could arguably be seen to be over-represented in – that of internally-registered cars.

It puts 10,000 cars – 10% of total sales volume – into internal and demonstration fleets

This is a level Carmichael is happy with. He says strong residual values, which have benefited the entire industry, make internal registrations viable.

“The return of residual values this year is a key factor in making the registration of cars internally, whether that’s by the manufacturer or dealers, much more possible,” he says.

There is one area that Audi is planning to grow sales in. It wants to sell more cars to small businesses.

“We don’t sell as well as we could in this market,” says Carmichael, despite having 96 showroom-based local business development managers (LBDM).

“There is a void here,” says Carmichael, referring to the decline in brokers who traditionally handled this business.

"We see the LBDMs as the Audi brokers but not multi-brand. And this is where we see growth opportunity.”

The battle for aftersales business

But it is the user-choosers – the drivers of Audi cars – that are the focus of Carmichael’s attention.

However, focusing on drivers and keeping them happy presents some challenges when it is not the driver who pays the bills.

Independent service centres are challenging the traditional model of having cars serviced at franchised dealers, and Carmichael must battle alongside his dealers to keep that work.

His response is to ensure the vast majority – 95% – of fleet servicing and repair work is also carried out by Audi dealers through its National Fleet Service Pricing programme, which guarantees service levels, lead-in times and prices across its dealer network.

Three-year agreements have already been signed with contract hire companies that will see them direct 90% of their service work to Audi dealers in year one, rising to 95% by year three. But dealers must now deliver on Audi’s promises.

Where dealers fail to meet the service level agreements, Audi will intervene.

But the programme goes further. “Customers have all the benefits of dealer service and they have labour rate consistency,” says Carmichael.

“But we are also offering enhanced goodwill support up to 100,000 miles over three years.

“So this is not just a commercial agreement. We have gone beyond to address all of the key issues.”

“The strongest fleet proposition in its sector with as much practicality as a mainstream hatchback but with the desirability of its premium badge.”

“With running costs among the best in class, the A4 is on of the most desirable cars in its highly-competitive sector.”