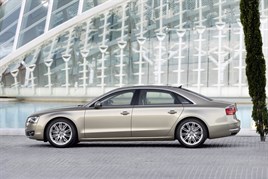 Audi has added a long wheelbase version of its flagship A8 luxury model, 13cms longer than the standard car, for the limousine market.

It expects to sell around 1,300 A8s in the UK next year and 60% of them will be the long wheelbase version, reversing the current position.

"The A8 is one of the most joined-up cars on the road in terms of technology," said Audi UK product manager James Allitt. "This is our technical flagship and if you look at the engines available, it's remarkable that we are achieving just 176 g/km of CO2 emissions with the 3-litre diesel.”

Two-wheel-drive versions will be launched sometime next year while Audi UK is looking at the business case for the hybrid A8 which is being launched in Europe next year.

Of the engines available, the lion's share in the UK will be two diesels, 3-litre TDI and 4.2-litre TDI with the 3-litre quattro accounting for 85% of sales. Other engines are a supercharged 3-litre TFSI petrol engine, 4.2-litre petrol and a new 6.3-litre, 500bhp W12 powerplant.