Average used car values in the fleet sector fell by £465 (7%) to £6,144 in June, according to figures from Manheim Remarketing.

And while BCA reported average fleet values improved marginally to £7,456, this was largely due to shifts in model mix over the month, with average prices actually falling in two of the three main product sectors.

Year-on-year comparisons show average fleet and lease values ahead by just over £400 in June, although CAP performance is down by more than five points, according to BCA.

Taking the longer view, however, shows that fleet cars are slightly older when remarketed in 2010 – between 39 and 40 months rather than 38 and 39 as they were last year.

“Given the unusually difficult trading conditions in June a fall of this magnitude, significantly above the seasonal norm, is no surprise,” said Manheim Remarketing managing director Mike Pilkington.

“Unless there is a more positive outlook for consumer demand through the traditionally quiet period of the summer months then only a reduction in vehicle supply is likely to ease the pressure on prices.”

However, while BCA communications director Tony Gannon acknowledged a turning point in demand in recent weeks, he said demand was far from flat.

“It’s just more selective than it has been and that means presentation and condition becomes increasingly important,” he added.

“Buyers are competing strongly for cars in ready to retail condition and therefore sellers are advised to appraise their vehicles carefully and consider rectifying any cosmetic damage prior to sale.”

Average age is up by three months compared with June 2009 at 51 months and average mileage is higher by 1,986 miles at 50,896, perhaps reflecting extended use during the recession.

This is particularly evident in the fleet sector with average age and mileage of small hatchbacks up by eight months and 3,500 miles respectively, compact executives are up by seven months and 7,500 miles while coupés increased by nine months and 6,500 miles.

Against all expectations, average used car values at BCA showed a modest increase in June, with average values recovering most of the loss sustained in May to sit at £5,802, a £146 improvement over the previous month’s figure of £5,656.

Year-on-year values, however, are behind for the second month running, but by a lower margin than seen in May – just £48 separates the average values recorded in June 2009 from June 2010, compared to £117 last month.

The primary driver of the value recovery was a change in model mix that saw a 16% uplift in the volume of premium fleet cars sold by BCA. 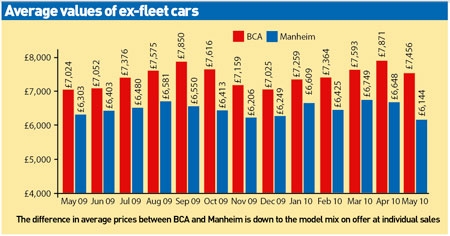 Van prices stagnate for second month in a row

Average monthly values for LCVs slipped in June, making it two consecutive monthly falls on the back of the record levels reached in April, according to BCA.

LCV values averaged £4,280 across the board in June, a fall of £186 (4.1%) against May’s values, with both fleet and lease and part-exchange values decreasing, while nearly-new posted an increase.

However, while Manheim reported that at £4,301 average wholesale used van prices rose by £11 (0.3%) compared with the previous month, it urged caution when looking at its headline rise.

“As conversion rates have hardened due to both seasonality and an increase in supply, the contribution made by the smaller, and arguably more desirable, volume segments has driven this overall increase in average sale price,” said James Davis, general manager, commercial vehicles, Manheim Auctions.