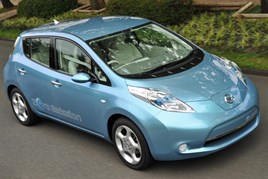 Fleet News can reveal exclusively that Nissan’s Leaf electric vehicle will retain almost half its value (including government discount) after three years of use, according to new figures from CAP.

The electric car, which is available to order and will begin arriving with customers in March 2011, is valued at 40% of its original £28,990 cost on October’s CAP monitor at three years/30,000 miles.

However, for customers receiving the £5,000 discount on electric vehicles currently being offered by the Government, it will result in a residual value of 46% over the same period.

This is the first used value to be supplied for the latest generation of electric vehicles.

The cost of charging an electric vehicle to drive its maximum potential range of 100 miles is usually four or five times less expensive than travelling 100 miles in a petrol or diesel powered vehicle.

CAP's Mark Norman told Fleet News: "The Leaf should have a shallower depreciation curve than conventional cars; the electric motor has fewer moving parts than an internal combustion engine so when mechanical issues and wear and tear begin to affect other cars, the Leaf should still be running well."

He added that companies using the Leaf and other electric vehicles will gain more from the running costs equation the longer they keep them on the fleet.

Click here to read about Peugeot's plans to lease its electric vehicle to fleets.