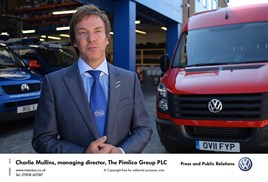 New research from Volkswagen Commercial Vehicles UK has revealed that more than a quarter of van drivers do not take it into consideration how much fuel they are using day-to-day.

Volkswagen says it appears that it is not just drivers who are guilty, with van fleet operators admitting to having only taken a limited number of measures to optimise their drivers’ fuel efficiency. Less than half (42%) have considered planning routes for their staff, while only 35% have considered the effects of the driving habits of their van drivers.

According to the findings, only 18% of van drivers have received any form of training to help them drive more fuel efficiently while only 23% have their routes planned for them, and 81% still don’t have satellite navigation to help plan the optimum routes.

In fact, nearly a quarter (23%) of van drivers felt their routes were inefficient as far as fuel consumption was concerned, often finding themselves making two trips on the same route in the same day.

Interestingly, of the 60% of commercial van drivers that have a company logo on their vehicle, 58% of them thought this made them drive more carefully than they might otherwise.

“Due to increases in fuel prices last year, we had to spend £150,000 more on fuel. However, there are ways to improve fuel efficiency and these can be as simple as taking the shortest routes and placing speed restrictions on vans.”

Commenting on the results of the research, Alastair Hemmings, national fleet manager, Volkswagen Commercial Vehicles UK, said: “This research clearly shows that van drivers and fleet operators can easily save money by choosing more efficient vehicles and considering other areas of their operation where efficiencies can be made.”