Used car market steadies in May 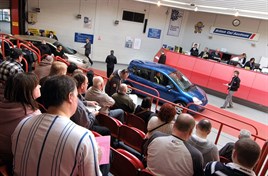 BCA’s latest Pulse report shows that average used car sold values climbed in May as the market recovered from the disrupted trading patterns experienced in April. The bulk of the recovery was felt in the dealer part-exchange sector, while fleet/lease values fell for the fourth consecutive month and there was also a decline recorded in the nearly-new sector. Sold volumes increased by over 9%, month on month and sale conversions also saw a modest recovery.

Performance against CAP Clean improved by around one and a half points to 94.5% - almost exactly the same as the figure recorded in May 2010.

BCA’s communications director Tony Gannon commented “Buyer confidence has notably improved following the very disruptive trading conditions experienced at the back end of April. May had the feel of a typical late spring/early summer marketplace, with some price pressure but lots of interest for the most desirable vehicles. Conversions have improved and supply and demand is reasonably well balanced.”

“What we are seeing is normal seasonal patterns for this time of year and we are not expecting any real growth in supply this side of the next registration plate change in September.”

“However, the continuing economic pressures on household budgets should not be ignored. Rising inflation means costs – particularly on household essentials and fuel – are a major concern for families on fixed budgets meaning it is not the most conducive set of conditions to contemplate buying a replacement or ‘new’ used car. The latest report from the British Retail Consortium highlights this, saying shoppers bought fewer items across the board in May, with sales of big ticket items falling.”

Fleet values continued to fall for the fourth straight month, but this is largely a reflection of the market peaking early in January and slowly declining from that high point ever since. Values fell by £64 (less than 1%) to £7,349 in May, while CAP performance improved by a point to 94.27%. Sold volumes actually improved by a significant 21% compared to April, broadly returning to where they were in March. Year-on-year values are behind by £79 – just over 1%.

Gannon added “The fleet sector has a particular issue as there are still volumes of older, higher mileage and often poorly presented vehicles clogging the arteries. Many of these have been entered for sale a number of times – usually with over optimistic expectations – and are continuing to depreciate the longer they remain unsold. We echo the warning issued by NAMA last month that cars that are re-offered for sale a number of times rarely attract higher bids in subsequent sales.”