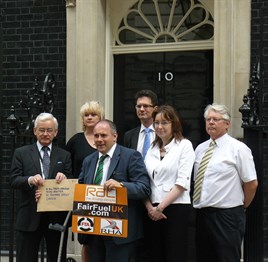 FairFuelUK campaigners, led by Harlow MP Robert Halfon, and including the Road Haulage Association and the Freight Transport Association, have written to the Prime Minister.

"High fuel taxes aren't working,” said Halfon. "Not only are our road freight industries being crushed, but foreign road freight operators continue to expand their operations in the UK at the expense of domestic hauliers as their rates of duty are up to 24 pence per litre less than their British counterparts".

The lobbying exercise was to request Government consideration for two proposals:

• To initiate an inquiry as to why pump prices do not fall when the price of oil decreases
• To abandon the inflationary duty rise planned for January 2012 which will have the potential of adding 4 pence per litre to the price of fuel. If the cost of filling a tank becomes easier to bear, this could result in a higher tax revenue for the Treasury

"Today has been about bringing the critical issue of rising fuel prices to the very heart of government," said FTA chief executive Theo de Pencier. “The cross party support we have amassed shows there is a real political appetite for fuel tax reform and that this is matched in constituencies around the country.

"Fuel is the biggest single cost for transport operators and unless the government acts to relieve the pressure faced by hauliers and other businesses we could be in danger of seeing more redundancies and more insolvencies in this beleaguered sector."