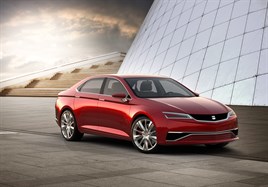 The 2011 Frankfurt Motor Show sees Seat continuing the development of its design DNA with the world debut of the new Seat IBL concept car.

James Muir, president of Seat, S.A. said: ‘The IBL shows that sports saloons within the Seat brand portfolio will play an important role in future. However, this concept car does not pre-empt a specific model, but rather shows the design philosophy we are applying to bring the unmistakable Seat identity to a saloon car, too.’

He added: ‘The IBL is the perfect representation of Seat brand values – with its distinctive look, its precision and its premium feel. Over the next few years, Seat will embark upon a product offensive that will see the spirit of the IBL reflected in several series-production models.’

The IBL completes Seat’s exciting series of concept cars that define the genetic design pool for the ongoing development of the sporty Spanish brand’s cars. Laying the groundwork was the highly acclaimed IBE compact electric sports coupé. The IBX that followed showcased the new DNA code of Seat design in different vehicle architecture – a crossover between SUV and sports coupé.

Dr Matthias Rabe, vice-president of Research and Development at Seat, said: ‘In Seat’s Technical Centre (CTS) we have combined the latest technology that the Volkswagen Group offers with our design language to achieve products as exciting as the IBL.’