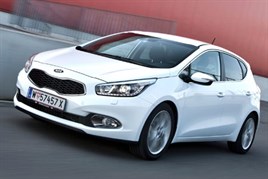 The all-new Kia cee’d has been named Northern Car of the Year by the Northern Group of Motoring Writers – the car’s first major award-win since its launch in May.

Praised by the journalists from across the North of England for its refinement, sophistication, quality and excellent value the five-door cee’d won the honour in the face of stiff competition for a raft of impressive new cars from rival brands.

Derrick Grocock, vice chairman of the Northern Group of Motoring Writers, presenting the traditional miner’s lamp trophy said: “Over the last 12 months there have been some fantastic new products brought to car buyers by the world’s most vibrant and innovative industry – but despite that competition the Kia cee’d was a clear winner in the voting.

“For hard-pressed motorists in the North, investment in a new car has to really work hard to be justified and the Kia cee’d delivers on every front – comfort, reliability, quality, value and of course peace of mind from its seven year warranty,” he added.

Accepting the award at a ceremony in Wetherby, Yorkshire, Stephen Kitson, communications director at Kia Motors (UK) Limited said: “This is a great honour for all of us at Kia. It is the first COTY award won by all-new cee’d but it is also the second Northern Car of the Year title in a row for us – and that really delights us! Last year Sportage captured this title and to do it for a second time in a row shows just how committed Kia is to bringing great products to UK customers.

“We are very grateful to the Northern Group to Motoring Writers as we know how hard it is to win their approval because they think first and foremost about their readers and their needs. Winning this award is a real achievement for any new car,” he said.