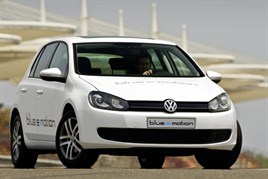 In late summer 2013, Volkswagen will launch the 1.6-litre TDI Bluemotion Golf. This all-new engine offers 110bhp, 5bhp more than the standard 1.6 TDI, and reduces emissions from 99g/km to just 85g/km, with fuel efficiency of 88.3mpg.

It will be priced slightly higher – expect an £800 premium – and while Volkswagen will run both models side-by-side for a time, it has not ruled out dropping the lower powered engine at some point.

That decision rests on whether it decides to bring the Bluemotion in both S and SE trim – the current car is available only in one trim.

Volkswagen predicts sales to be largely unchanged from the existing model’s 60,000, which account for almost three-quarters of total Golf registrations.

For now, the 1.6-litre TDI SE 105bhp five-speed manual will be the key model. Fleets can order from October 18; deliveries begin in January.

The corporate-staple 1.6-litre TDI cuts CO2 emissions from 107g/km to 99g/km, due in part to a 100kg weight reduction; residual values are expected to increase a couple of percentage points; SMR costs will reduce – all of which adds up to cheaper running costs.

Additions to the line-up in 2013 include the Bluemotion, GTi and GTD variants. An electric e-Golf will be launched in early 2014 (the UK will not take the CNG – compressed natural gas – version due to lack of infrastructure), followed by a plug-in version in 2015.

The full review of the new Golf will be published in this month’s Ignition magazine.

Click Here to register to receive a copy straight to your inbox or to view previous issues.