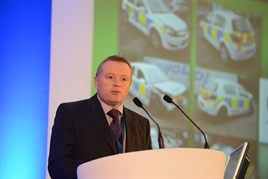 A vehicle recycling scheme is saving police fleets 65% on each part they buy compared to the price they would have paid from a dealer.

That equates to a £714,000 saving over the past two years after they paid less than £400,000 for parts that would have normally cost in excess of £1 million.

A number of forces have been using recycled parts for several years. However, the process has now been formalised with Mygreenfleet, which is owned and managed by FAB Recycling.

Mygreenfleet signed an end-of-life vehicle contract with the National Association of Police Fleet Managers (NAPFM) in May 2012.

Vehicles deemed too costly to repair are bought from the police before being stripped for non-safety related parts.

So far, 20 out of the UK’s 53 police forces have signed up to Mygreenfleet; parent FAB also supplies recycled parts to a number of government and private sector fleets.

The agreement, which comes as a result of work carried out by the new Regional Procurement Team on behalf of the Home Office and NAPFM, will initially run for a period of two years and provide a contracted means of disposal for end-of-life vehicles, as well as the opportunity for forces to buy back non-safety related green parts.

“We made more than 1,900 individual shipments of parts in the past two years,” he added.

“I can get a part off a Sussex vehicle and two days later, or even the next day, I can have that part delivered to Northumbria to fit on another vehicle to go back into service.”

Several police forces have been using recycled parts for a number of years and making considerable cash savings.

For example, during the 2011/12 financial year, West Yorkshire Police saved more than £44,000 on recycled crash repair parts alone and a further £61,000 on all other recycled parts.

Steve Thompson, head of transport for West Yorkshire Police and the regional lead for fleet in Yorkshire and the Humber, said: “This contract not only provides a safe and effective means of disposing of end-of-life vehicles in accordance with all environmental legislation, it will also encourage a greater use of recycled parts across all UK police forces providing additional savings.”

Cross estimates savings of £100 per vehicle per year and has 5,000 items in stock, including doors, tailgates, engines and gearboxes.