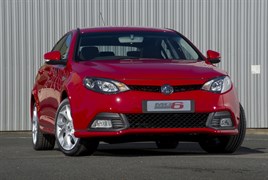 Bosses at born-again sports car firm MG are banking on fleet operators playing a pivotal role in a dramatic plan to ramp up sales.

Company purchases will be at the heart of a bid aimed at mushrooming next year’s modest total registrations of 1,500 diesel-powered MG models into annual sales of more than 100,000 by the end of the decade.

"Our ambitions are huge and hinge on a growth curve that calls for us to double our sales performance each year for seven years beyond 2013. I admit that looks like a tall order, but we believe we can do it.

"Our Chinese owners want us to expand and we are convinced we have the tools to deliver," said Richard Bourton, business sales manager of MG Motor UK, the revitalised brand operating on part of the sprawling Longbridge factory site that was the hub of the British motor industry until the collapse of the Rover Group.

Much of the growth will be driven by a new 1.9-litre diesel motor created and developed by engineers at the company’s UK design and technical centres based on the site and now ready to go under the bonnets of MG6 hatchback and Magnette saloons.

The models have CO2 emissions of 139g/km, fuel consumption of 54mpg on the combined cycle and are priced from £16,995 on the road.

"The motor has been developed to deliver the performance sought by fleets and we think it will account for most of our business across a choice of three trim levels. But I’m hoping we will soon be able to offer a fourth version that will have lower emissions and be more in line with the tax changes expected in the next two years," Bourton told Fleet News.

In the meantime, the next new car, the MG3, will arrive next year. Already the best-selling car in China, the 1.5-litre hatchback is similar in size to the Ford Fiesta but will not come with the diesel option.

"We’ve looked hard at the Fiesta and think there’s an opportunity in the segment because a high proportion of customers still prefer petrol power," said Bourton.

As it is progressively rolled out across EU markets, the MG3 will add further momentum to assembly at Longbridge, where its Rover 200-based predecessor used to be built. It will then be followed by the MG5, sized to rival the VW Golf, and sport utility and multi-purpose models are also planned for a model range that is expected to be seven-strong by the end of 2017 – the year when smaller diesel engines will also appear.

"There’s a lot of affection for MG and we want to make the brand a household name here and across Europe. The success of the Qashqai shows that people like something different and that description will apply to all our vehicles," said Bourton.