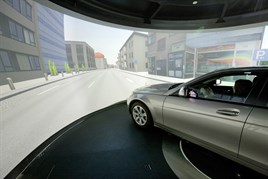 Mercedes-Benz will move one step closer to producing a car that won’t need a driver with its next-generation S-Class.

The car will be packed with new technology, such as heat sensitive equipment which picks out pedestrians and animals at night. It will also be able to detect people about to step into its path and will have seatbelts which inflate in the event of a crash.

The new S-Class will not go on sale until next year, but the German manufacturer has told Fleet News about some of the Intelligent Drive features it will have on board.

They have been honed with the aid of a purpose-built E25 million (£20m) simulator at its development centre at Stuttgart.

One of the most ground-breaking is Steering Assist, a system which is capable of steering the car even at high speed when the driver takes his hands off the wheel.

Current legislation means the car can’t totally take over, so drivers ordering a new S-Class will have to be content to keep their hands on the wheel but let Steering Assist do most of the work for them, keeping them centred in their lane.

The driver is able to take their hands off the steering wheel for 10 seconds before a flashing sign instructs them to grip the wheel again.

If they don’t, the car sounds a warning buzzer – sufficient to wake a sleeping driver – and then switches off the system five seconds later.

Steering Assist is an add-on to the Distronic Plus system on the current S-Class and Mercedes-Benz freely admits that it’s a move towards driverless cars although it says it has no plans to introduce hands-free driving because of legal considerations.

“This is the first step towards autonomous driving,” said Dr Berhard Morys, who runs the state-of-the-art simulator. “I’m sure it will come but it’s difficult to predict how far away it is.

“This car can steer itself now in normal traffic conditions. But while people can make mistakes on the road and it’s accepted, if a machine makes a mistake people are not yet ready to accept that.”

The new generation S-Class comes with 26 sensors covering 360° around the vehicle. The sensors ‘talk’ to each other to build up a reliable image of the traffic situation around the car.

Some are cameras, some are radar systems, while others are ultra-sonic or infra-red sensors.

The stereo camera located behind the windscreen near the rear view mirror, for example, recognises lane markings as well as vehicles driving ahead of it together with their 3D positioning, and relays this information to the electric steering assistance system. It has a range of up to 500 metres ahead.