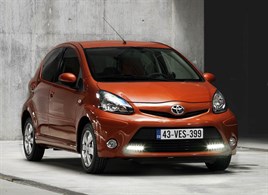 Toyota is taking action to increase the level of safety equipment in its Aygo following a three-star rating in the latest Euro NCAP test.

The Aygo, which is produced by Toyota in the Czech Republic along with the Citroen C1 and Peugeot 107, scored just three stars under the requirements of the 2012 NCAP tests despite achieving a four-star rating when the car was new in 2005.

And this rating was only achieves with safety features fitted that will not become standard across European countries until July 2013.

The Aygo, C1 and 107 share the majority of components with only subtle cosmetic differences, so the safety ratings would also be common among them.

Dr Michiel van Ratingen, Euro NCAP secretary general said: "Our test protocols have evolved significantly over the past few years. There are more tests and the requirements have become more stringent.

"Despite this, many manufacturers have engineered their latest cars to achieve the highest score. On the other hand, we see that some manufacturers continue to offer popular best sellers without making the necessary incremental updates to safety.

"It is those models that obviously fall behind other, more modern cars competing in the same category."

Toyota has since committed to make the following items standard across all European countries from July 2013:

Peugeot and Citroen have agreed to ensure their products also feature the same safety equipment from that date.

Van Ratingen added: "With this non-standard equipment fitted, the Aygo achieves a three-star result; without it, the rating would probably have been much worse.

"Side impact airbags and electronic stability control are standard on many cars in this category and our tests demonstrate how important it is for manufacturers to keep their cars up to date when it comes to safety.

"As our protocols develop, cars last tested many years ago should not be assumed to compare well with more modern vehicles. Consumers should buy cars on the basis that the more recent the star rating, the safer the car."