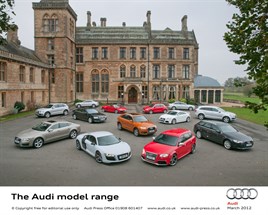 The Audi Group has set records for deliveries, revenue and key earnings data in the fiscal year 2011 after selling more than 1.3 million cars in the past year, while at the same time increasing revenue to 44.1 billion Euros.

As a result, operating profit for the Audi Group rose to over 5.3 billion Euros and the operating return on sales climbed from 9.4 to 12.1%.

Rupert Stadler, chairman of the board of management of AUDI AG, said: "Never before have we had such a large increase in deliveries in a single year.

“We want to continue on this path in 2012 and grow more strongly than the market as a whole."

Experts expect the overall car market worldwide to grow by around 4% this year.

Assuming that there are no major changes in the underlying economic situation, the company plans to generate an operating profit for 2012 in line with the level attained in the record-breaking year 2011.