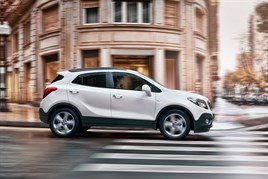 Vauxhall has announced that there will be a fourth trim line of its Mokka SUV aimed at company car drivers, called Tech Line and costing £15,995.

The Mokka Tech Line will enter the growing sub-compact SUV B-segment, but despite its compact 4.28 metre length can accommodate five adults in comfort.

Its key rival will be the Nissan Qashqai although some customers may well view the Mokka as a competitor to the Juke and the Skoda Yeti. Like all Vauxhall passenger cars, the Mokka comes with Lifetime Warranty.

Three engines, ranging in power from 115 to 140PS, will be available from launch. The 1.6-litre petrol produces 115PS and 155Nm of torque, and with its standard Start/Stop system delivers a combined 43.5mpg. With 140PS, the 1.4-litre turbo is the Mokka’s most powerful petrol engine and brings with it standard four-wheel drive and sub-150g C02 emissions.

The Mokka has a choice of two diesel models, both of which use Vauxhall’s 1.7 CDTi 130PS engine, with C02 emissions as low as 124g/km.

“The Mokka takes its design cues from larger SUVs and integrates them into a compact, yet modern form,” said Duncan Aldred, Vauxhall’s chairman and managing director.

“We are now growing a compelling and diverse range of products that appeal both to retail and fleet customers, and the Mokka will complement this perfectly.”