Audi A6 Hybrid available to order 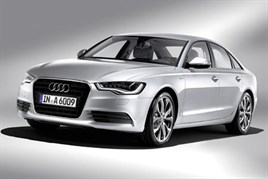 A hybrid version of the Audi A6 is now available to order, offering user choosers a lower tax alternative to V6 diesel variants.

This means that it lacks the power of its rivals but at 1,770kg it weighs less resulting in a 0-62 time of 7.3 seconds, and although this is slower than its more powerful rivals, when Fleet News drove it last year it didn’t feel lacking in performance.

The A6 hybrid can run on its electric motor alone for nearly two miles at a constant speed of 37mph before the petrol engine kicks in.

The P11D price and competitive CO2 emissions mean that a company car driver in the Audi A6 Hybrid will face substantially lower tax liability than a driver in the equivalent 245bhp A6 3.0 TDI Quattro.