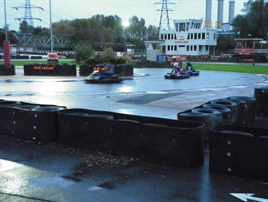 A karting event organised by automotive benevolent charity BEN has raised over £1,500 for the charity.

17 teams from across the automotive industry competed at Rye House Raceway on October 27 to win the champions title.

With the lure of taking home the coveted Karting trophy it was the Enterprise Rent-a-Car team who eventually took first place, just edging Mac Tools into second place. A valiant effort from Burton Power saw them secure the third spot on the podium. Runners -up Mac Tools had the consolation of posting the fastest lap time, recording a lightning quick time of just 52.49 seconds.

The rain started just as qualifying began, leading to a series of spectacular slides and spins as the competition really got going. Resolve and commitment are needed on days like this but poignantly these are the self-same values BEN needs to continue its tireless work supporting industry colleagues in times or hardship and distress. This event is one of many BEN organises annually to raise much-needed funds.

Warren Neal, BEN's Events & Exhibitions Co-ordinator, said: "Thank you to all the teams for getting involved and sticking with it despite the terrible conditions! It was great to see so many teams from across the industry going head-to-head on this amazing circuit. Congratulations to Enterprise Rent-a-Car who produced an outstanding display to lift the BEN Karting trophy. See you all next year – hopefully on a much drier day!"