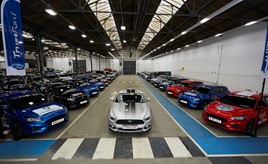 The 52 teams, which set off from TrustFord’s National Fleet Distribution Centre in Warwickshire, were challenged to travel as far as they could in 25 hours, driving specially branded New Ford Focus or Ford Tourneo vehicles.

In total, the teams travelled more than 35,000 miles, with the chairman’s prize for furthest destination won by a team from TrustFord Castleford called Kitto’s Crusaders, who made it all the way to Leuca in southern Italy.

The prize for most unusual destination went to the Skidmarks team from Craigavon in Northern Ireland, who stopped off at the house featured in classic comedy Father Ted.

Other far-off destinations reached over the weekend included Sacuieu in Romania, Bari in Italy and Malmo in Sweden.

Despite the great distances travelled, all of the breakouts were carbon neutral thanks to the support of Castrol who will be offsetting their emissions with BP Target Neutral credits to fund low carbon development projects around the world.

Distance was not the only factor judged in the challenge. Some drivers focused on maximum mileage with minimum environmental impact.

The prize for most efficient use of Fuel was won by the Banboo Kings team from Surrey, who achieved an impressive average of 50.8 miles per gallon on their journey.

TrustFord chairman and CEO Stuart Foulds set the challenge back in October to raise as much money for Ben as possible.

The award for the Most Money Raised went to the TrustFord Edgware team called Ben Around the World. They raised £6,790 through activities like curry sales and bake-offs, with the support of 1,086 individuals.

They also received the biggest single donation from buymobiles.net, who donated £2,000 to support the team.

Foulds said: “Ben is an incredibly important charity that has helped thousands of colleagues over the years, so we are proud to have been able to support its work.

“Our Breakout for Ben challenge is the largest single fundraising event we’ve ever completed as a group and was a huge team effort. I’m glad the teams had fun on the road and returned safely with many tales to tell friends and family of their adventures for this very worthy cause.”

Zara Ross, chief executive of Ben, said: “We’re delighted that TrustFord has supported us through Breakout for Ben, a fantastic event which has involved so much planning, thought and initiative.

“Our funding comes entirely from the automotive industry, so initiatives like this are vital to help us provide support to those going through some of life’s toughest challenges.

“We can’t thank everyone at TrustFord enough for taking part in this challenge, raising such a significant sum of money and to those who donated.”

TrustFord is celebrating being placed on the Sunday Times Top Big Companies to Work For 2018 list for the second year running, climbing two places to 20th.

Fleet dealer of the year: A good reputation and the right offer are key to TrustFord progress

Find out what the Fleet Dealer of the Year, TrustFord's business growth, the impact of it's leasing hub in Bradford and plans for the future following the Fleet News Awards.