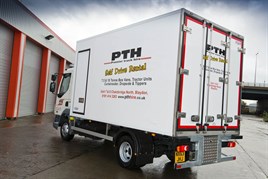 Premier Truck Hire relocated this month (December) from its previous home in Ponteland, Newcastle, to a new base on Chainbridge North, Blaydon, complete with fully refurbished and comprehensively equipped six-bay workshop.

“It’s yet another string to our bow,” business development manager Allun Cairns said. “There are not many other companies offering refrigerated vehicles for contract hire and rental in this part of the world, so we view this as a big opportunity to grow our business.”

Commenting on the decision to specify its first three fridge trucks with Gray & Adams bodies, he continues: “I was previously employed by a truck dealer and have long experience of working with Gray & Adams. Its insulated bodies are widely recognised as the best on the market in terms of their build quality and durability, while its warranty and aftercare support is exceptional too.

“Gray & Adams is also renowned for building bespoke products, rather than the ‘off the shelf’ lines offered by some of its competitors. Indeed, the manufacturer’s representative David Purvis went to great lengths during the design phase to ensure that the specification of our bodies was perfectly tailored to meet our requirements.”

Premier Truck Hire’s optimism about the prospects for its new venture received a boost when two of its first three vehicles were immediately snapped up Gateshead-based fruit and vegetable distributor JR Holland Food Services on a contract that will take them through until next spring.

The truck bodies were built at Gray & Adams’ factory in Dunfermline and are mounted on chassis supplied by Birtley DAF dealer Chatfields. Their liveries are by First 4 Signs of Newcastle.