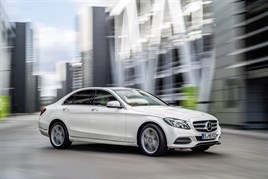 Mercedes-Benz has unveiled the new lighter and more efficient C-Class due to make its public debut in Detroit in January 2014.

The new model is 100kg lighter than its predecessor, despite being longer and wider, thanks tto greater use of aluminium in the car's body.

Mercedes-Benz says the weight saving achieve fuel consumption improvements of up to 20% compared with the current model, in addition to a lower centre of gravity making the car feel more agile and responsive.

Aerodynamics have also been improved, contributing further to the car's efficiency.

There will also be a C300 Bluetec Hybrid for the fist time, using the diesel-electric powertrain from the E-Class, and later in the model's life a plug-in petrol hybrid.

It will also be available with some of the safety systems offered on the latest versions of the E-Class and S-Class.

The car is expected to be available in the UK in the spring with prices started at around £27,000 on the road.