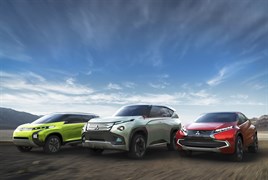 Mitsubishi's UK boss has set out ambitious plans for growth in the next four years fuelled by new products and a more favourable exchange rate.

The company targeted 30% growth for its cars in the UK during 2013, but has achieved an increase in sales of around 42% for the year to date, and now Lance Bradley, managing director of Mitsubishi in the UK believes it could reach total sales of around 30,000 units over the next four years.

Mitsubishi has witnessed strong growth in 2013 largely thanks to the introduction of the new Colt and attractive retail incentives. It is currently on target to register around 8,500 cars this year. However, it is expected to boost sales further in 2014 with the introduction of the revised ASX medium crossover, and has new models in the pipeline.

The ASX competes in a burgeoning sector, and with a more favourable yen/sterling exchange rate, Mitsibishi has been able to reduct prices of the car by 9-10%, as well as improve equipment levels.

The entry level model will now start at £14,999 for petrol models and £18,930 for diesel. It has also introduced a new 2.2-litre diesel engine with an automatic transmission and four-wheel drive. The range-topping diesel automatic is priced at £23,899 compared with £26,955 for the equivalent Hyundai ix35.

He saw an opportunity to achieve conquest sales with the revised ASX, against brands such as Hyundai and Kia, as well as with the Nissan Qashqai, which is larger than the model it replaces.

Three concept cars (pictured) shown by Mitsubishi at the Tokyo Motor Show in October will all become production cars available in Europe, including replacements for the Shogun and ASX, and a new people carrier.

Mitsubishi is also developing plug-in hybrid technology, and it is likely that the next version of the L200 pick-up truck will eventually be offered with a diesel hybrid.

Bradley added: "Over the next three to four years we'll get to around 30,000 units. Dealer profitability has turned around this year and we're attracting new partners to the franchise. Mitsubishi Motors Corporation is also back in profit and is confident of where the brand is going."