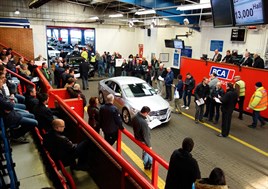 BCA’s latest Pulse report shows that the headline average value fell in January from December’s high point, although this was largely due to a changing mix of vehicles, but values for fleet and dealer cars continued to rise in January.

The remarketing company says the headline fall  was largely due to a changing mix of vehicles, as greater volumes of relatively lower value dealer part-exchange cars were sold during the month.

BCA’s UK operations director Simon Henstock commented: "Although the headline value declined compared to December due to a shift in the mix of cars sold, January essentially delivered more of the same – a shortage of stock allied to decent levels of demand that generated exceptionally strong prices in the used car market.

“With stock remaining thin on the ground, buyer demand is focused on the best quality vehicles and this is driving values up. Sale conversion rates also rose in January as buyers competed for stock and BCA saw lots of activity in the online arena with nearly a quarter of all vehicles being purchased by internet bidders.”

He added that the rise in average prices at the ‘value-for-money’ end of the market continues unabated and this must be a reflection of the current economic conditions.  As household budgets remain squeezed, the increased demand from motorists for affordable transport is driving values upwards.

Fleet and lease cars averaged £8,526 in January, rising by just £17 compared to December but still establishing a new record monthly value.  CAP performance improved by over two points to 97.7%, while value against original MRP (Manufacturers Retail Price) improved by half a point to 41.48% across the fleet & lease sector.

Year-on-year, the fleet & lease sector recorded a significant £1,091 (12.8%) uplift. Average age and mileage were slightly up month-on-month, but down year-on-year.

Having improved sharply in December, average part-exchange values improved yet again in January, rising by £16 to a new high of £3,580. While the rise in December might have been explained by lack of supply, volumes in January returned to more typical levels which suggests strong demand during the month. CAP performance rose by over one and a half points to 97%.   Year-on-year, values were ahead by £660 - a significant 22.6% uplift compared to January 2012.

Average values fell in the nearly-new sector by £2,054 to £20,283, while performance against CAP Clean improved by a point and a half to 100.8%.  Nearly-new values will always be affected by changing model mix in this low volume sector.