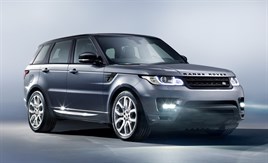 Land Rover has taken the wraps off the new Range Rover Sport, which now offers CO2 emissions from under 200g/km as well as a seven-seat version.

Unveiled at the New York Motor Show, the car benefits from reduced weight thanks to aluminium construction resulting in improved fuel efficiency.

The car has a new '5+2' seating option offering occasional seats in the third row (remembering the Land Rover Discovery is a full seven-seater), while a weight saving of up to 420kg compared with the outgoing model means the V6 diesel variant has CO2 emissions from 194g/km - more in line with six-cylinder rivals from BMW, Audi and Mercedes-Benz.

Land Rover global brand director John Edwards said: "The all-new Range Rover Sport is a vehicle that has been designed and engineered without compromise.  With Land Rover capability at its heart, it is one of the most road focussed vehicles we’ve ever produced, but of course still offers unsurpassed all-terrain capability. It is a vehicle which is designed to be driven.

"We’ve taken ride, handling and agility to another level for Land Rover to deliver a truly rewarding, sporting drive, together with unmatched luxury, capability and versatility.

"Building on the success of the recently launched flagship Range Rover, the new Range Rover Sport also employs a vast array of new technologies which help to transform its performance, refinement and all round capabilities."

Although it was developed from the same platform as the new Range Rover, 75% of components are unique to the Sport. Developed for class-leading off-road ability as well as sound on-road behaviour, the Range Rover Sport will be launched with a 3.0-litre V6 diesel and a 5.0-litre supercharged petrol engine.

A V8 diesel and a V6 petrol will follow, and Land Rover has confirmed a diesel hybrid variant will also be added to the range in 2014 with CO2 emissions of 169g/km. Land Rover has also hinted that four-cylinder power could be possible in future because of the wight reduction in the new model.

The car is expected to be more expensive than the outgoing model, but prices will be announced closer to the car's on-sale date this summer.