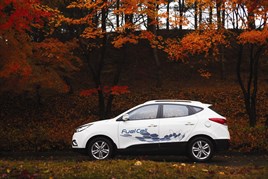 Hyundai will offer exclusive drives in a production version of the ix35 fuel cell vehicle at Company Car in Action.

The manufacturer has been one of the leaders in development of fuel cell vehicles, and says customers are able to order one of its ix35 hydrogen cars.

Hydrogen fuel cell cars are fuelled with hydrogen gas which is stored in an on-board tank. A chemical reaction powers an electric motor, and the only emissions from the exhaust pipe are water vapour.

Performance is equivalent to an electric vehicle while range is similar to that of a typical petrol car - often around 300 miles.

The ix35 fuel cell vehicle is based on the current version of the car available with a choice of petrol or diesel engines. The technology is packaged under the luggage compartment, and is ready for production.

Capable of doing up to 369 miles on a full tank of hydrogen, the ix35 Fuel Cell can be refuelled in the same time it takes to refuel a conventional petrol/diesel vehicle, but more importantly does not require customers to make major operational concessions to achieve zero emissions from their fleet vehicles.

Martin Wilson, fleet director at Hyundai, said: "The ix35 Fuel Cell will give fleet managers a unique and early opportunity to drive the first series-produced hydrogen fuel cell as well as to trial the real-world viability of the vehicle as part of a modern fleet operation."

To register for Company Car in Action, click here.