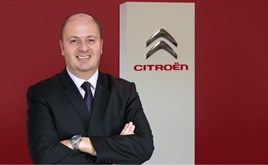 Citroën UK has announced the appointment of Bekir Hassan as sales director, with effect from July 1.

He will take over from Charles Peugeot, who is returning to Citroën France to lead part of the team that will develop future DS models.

Bekir has a long and successful history with the PSA Peugeot Citroën Group joining in 1992 and spending the last 21 years working for Peugeot.

From 2005 to 2008 he was operations director for Robins & Day (now PCR), responsible for 20 Peugeot locations across the UK. In 2008 he became regional director for the Peugeot Motor Company, overseeing 116 sales and aftersales locations in southern England.

Most recently Bekir (who is 49, and married with three children) was based in Turkey as sales director for Peugeot where he increased sales of passenger cars and commercial vehicles to deliver a market share of 5.7% - currently sales are up by 35% versus 2012.

Commenting on his new appointment, Bekir said: "I am delighted to be returning to the UK at such an exciting time in the development of the Citroën brand. With a raft of new products on the horizon, including our benchmark New C4 Picasso this autumn, the opportunities are fantastic to further drive our sales growth and dealer profitability.”

Linda Jackson, Citroën UK managing director, commented: "We welcome Bekir to this pivotal position within Citroën UK. With a long history in the PSA Group, Bekir brings a wealth of relevant sales and commercial experience to the role. I look forward to working with him to increase our sales and network profitability in the UK."