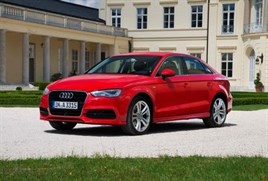 Audi has responded to competition from the Mercedes CLA by adding a saloon to its A3 model range.

Aimed at the Chinese and American markets, but expected to be popular with UK company car drivers, prices start at £24,275 – that’s more than the Sportback equivalent but less than an A4.

A choice of either Sport or S line trim levels will be available in the UK, and at launch will be offered in conjunction with a total of three engines - two petrol units and one TDI.

Both versions are fitted as standard with sports suspension and 17 or 18-inch alloys, although a comfort-oriented standard suspension is available for no extra cost.

The 2.0-litre diesel engine is likely to be the most popular with fleets with a combined fuel economy of 68.9mpg and a CO2 output of 107 g/km, while accelerating to 62mph in 8.7 seconds. Other diesels, such as a 1.6 TDI, are expected to be added to the range at a later date.

The low-weight 1.4-litre TFSI petrol engine is a sensible alternative to the diesel, Audi says, because of its cylinder-on-demand technology which deactivates two cylinders when under low engine load. It has a combined fuel economy of 60.1mpg and has CO2 emissions of 109 g/km, while accelerating to 62mph in 8.4 seconds.

Also available is a 1.8-litre TFSI petrol unit which sprints to 62mph in 7.3 seconds while returning 50.4mpg and emitting 129 g/km.

Orders are now being taken for the A3 saloon and the first deliveries are expected to take place in September.