New Micra will be at CCIA 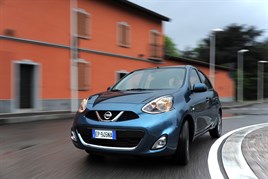 Nissan has announced that its new Micra will be at the Company Car in Action event on June 11 and 12 2013.

The company says the new model is much more than just a facelift, and has invested heavily in improvements to the interior and exterior design, which will also see a step-up in quality.

As well as a new look front and rear, the Micra has been given a substantial interior makeover. There is new technology, a new centre console and new trim. Depending on the trim level, there's also an all-new communication centre with touch screen navigation system, now with a larger screen. Outside, additions include two bold new colours and new 15-inch and 16-inch alloy wheels.

Nissan has also expanded Micra's choice of personalisation options, designed to appeal to a younger audience.

The new Micra will go on sale in the UK this September.