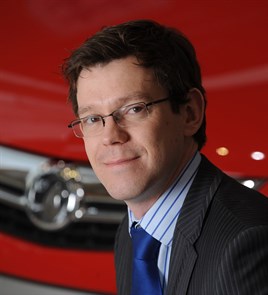 Vauxhall believes it has “lost” around 1,000 potential true fleet sales this year due to supply shortages for the Mokka compact SUV.

And the company, which recently announced production would move to Europe (Zaragoza, Spain), does not expect to win back those customers.

“These models have 80-90% incremental sales in fleet; customers will go and buy that type of vehicle from another brand rather than another Vauxhall,” said James Taylor, Vauxhall fleet sales director.

He anticipates supply will free up in the first quarter of 2014, with production gradually rising up to the switch to the European plant.

At the halfway stage of 2013, Vauxhall’s true fleet sales are up half a percentage point. Progress has been affected by the D-sector, which is down year-on-year by 25% - a “double-whammy”, says Taylor due to Vauxhall’s strength in the sector with the Insignia.

However, he believes the market decline in true fleet sales has “bottomed out”, although within the negative figures are positives in sectors like SME fleets.

“Larger fleets have been in decline and that is the heartland of the D-sector, but we expect that to come back in quarter four and we are optimistic that we will have a strong second half of year that will continue into 2014,” said Taylor.

“In some ways it helps us because of the new Insignia. Wholelife costs are more positive than the outgoing car and we are going around customers to understand where it will be positioned. Most leasing companies are quoting and the vast majority have it in a good position.”

Taylor expects leasing rates to be broadly level with the outgoing car, possibly with a small increase, but the car is better equipped and has lower emissions and better fuel consumption.

“When you factor in the rental, National Insurance and fuel, companies will be in a significantly better position with the new car,” Taylor said. “The Wholelife cost is probably edging towards a saving of around £1,000 over four years/80,000 miles.”

He believes the 1.6-litre diesel 99g/km Insignia will be a big fleet seller because the torque on the 140bhp car is the same as the 160bhp version.

“Over the next 12-18 months we will see that engine come into other models, for example the Astra which we need to get below 100g/km,” said Taylor.