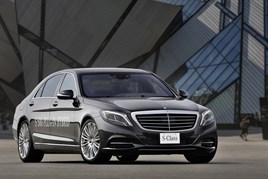 Mercedes-Benz has confirmed a new ultra-low emission version of the S-Class, with official fuel consumption of 94.2mpg, will come to the UK in September 2014.

The S500 Plug-in Hybrid has CO2 emissions of 69g/km and an emission-free range of up to 18 miles, which can be produced via plug-in charge or charged by the engine when driving.

The new model will make its public debut at the Frankfurt Motor Show, and will give the S-Class range three hybrid models, including the petrol-electric S400 Hybrid and the diesel S300 Bluetec Hybrid.

"With the S 500 Plug-in Hybrid Mercedes-Benz sets another milestone on the road to emission-free mobility on the basis of our modular hybrid matrix", said Prof Dr Thomas Weber, responsible on the Daimler board of management for group research and head of Mercedes-Benz cars product engineering. "In this way the S-Class turns into a genuine three-litre car with generous space and superlative drive-system comfort."

While the batteries of the S 400 Hybrid and S 300 Bluetec Hybrid as autonomous hybrids are charged during braking or coasting or by the combustion engine, the new high-voltage lithium-ion battery of the S 500 Plug-in Hybrid has ten times the energy content and offers the option of being recharged from an external source with a charging socket located on the right side of the rear bumper.

Four hybrid operating modes can be selected at the push of a button:

The operating strategy of the hybrid drive system not only accounts for the current driving condition and driver input, but also adjusts to the likely route (inclines, downhill stretches, bends or speed limits) for the next five miles.

It uses the navigation data from Comand Online to manage the charging and discharging of the high-voltage battery. The goal is, for example, to use the energy content of the battery for propulsion ahead of a downhill stretch in order to recharge it while going downhill using recuperation.

Full specification details will be published closer to the car's UK launch date next year.