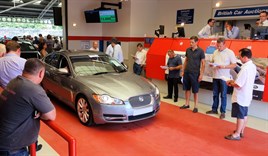 Year-on-year values remain well ahead, however, up by 11.2% as good quality stock remains in short supply.

BCA reports that demand from professional buyers remains relatively strong despite the market entering one of the traditionally slower times of the year, but recommends vendors should be valuing stock realistically as volumes will inevitably rise in the weeks ahead.

Fleet and lease cars averaged £8,780 in July, a fall of £80 (0.9%) compared to June. CAP performance improved for the second month running to 95.88%, while retained value against original MRP (Manufacturers Retail Price) fell marginally to 41.69% across the fleet and lease sector at an average of 39.6 months and just over 45,000 miles.

Average mileage continues to fall and cars are one month younger when sold in 2013 compared to last year.  Average performance against CAP Clean is around one point down, year-on-year.

Dealer part-exchange values were static compared to June, but also recorded a substantial year-on-year uplift. Nearly new values rose sharply largely as a result of a change in model mix.

Simon Henstock, BCA’s UK operations director, said: “The summer holiday period is typically quieter in terms of buying activity in the wholesale markets, but that is being balanced by the on-going shortage of good quality, ready-to-retail stock.

“Cars entered from dealer part-exchange sources have outperformed the market in recent weeks,   because dealers are so close to the market and value their cars realistically to tempt buyers in.

“As in previous months, cars presented in Grade 1 and 2 condition will typically make values well in excess of guide price expectations.

“However, vendors should beware of expecting a similar return for vehicles in poor or below average condition.   There is little to be gained by placing over-aspirational reserve valuations on poor condition cars if the market is not prepared to meet those expectations.

“Sellers should consider adjusting valuations now on poorer condition cars with a view to remarketing them before volumes begin to rise and buyers have more choice from mid-September onwards.”