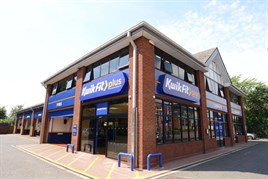 Kwik Fit is predicting a significant increase in the volume of servicing and mechanical work undertaken on fleet vehicles with the launch of a new initiative.

Kwik Fit Plus is being introduced at 17 centres in the South East of England with the potential for the concept to be rolled out to further centres across the UK in the future.

Many Kwik Fit Plus centres have already gone through the company’s ongoing multi-million refurbishment and modernisation programme and have effectively been divided in two with separate teams of fully trained staff each delivering traditional ‘fast-fit’ as well as ‘slow-fit’ services.

The company introduced fleet vehicle servicing and MOT capability at the majority of its more than 600 UK centres six years ago. Kwik Fit is Britain’s largest MOT tester having completed in the region of 800,000 tests last year of which 5% were on fleet vehicles. Additionally, last year the company also reported a 10% rise in the number of services and brake repair/replacement jobs carried out on fleet vehicles.

Despite the year-on-year increase in the volume of mechanical work being undertaken on fleet vehicles, Lambert said: “We recognised that we were only scratching the surface in terms of penetrating the fleet servicing market.

“We also recognised that there were limitations in some centres in terms of the mechanical work being delivered and that we needed to further improve delivery consistency across the network.”

Kwik Fit’s answer was the launch of Kwik Fit Plus as an 18-month pilot in eight centre locations across the UK - Brentwood, Edinburgh, Exeter, Scunthorpe, Slough, South Croydon, Warrington, and Wolverhampton.

The Slough centre is the flagship of the new Kwik Fit Plus network following an investment of some £300,000 on refurbishment and new cutting-edge equipment.

At Kwik Fit Plus centres:

The success of the initial pilot, which included performance increases in a number of areas including quality and volume of work, has meant that the pilot is being extended with a total of 17 centres being designated Kwik Fit Plus across the South East.

In addition to the existing Kwik Fit Plus centres at Brentwood, Slough and South Croydon there are now locations, which will be opened by the end of 2013, at: Basildon, Basingstoke, Billericay, Chelmsford, East Grinstead, Gillingham, Gravesend, London (Acton, Colindale Ilford, Old Kent Road, South Ruislip and Wandsworth) and Tonbridge.

Lambert said: "One of the major reasons for the cluster of Kwik Fit Plus centres in the South East is to give a significant number of fleets the opportunity to test our new concept for themselves."

Having been through the company’s continuing centre modernisation and refurbishment programme, all the new Kwik Fit Plus locations have the atmosphere and standards found in a modern volume car dealership.

Meanwhile, Kwik Fit Plus centres have all had the latest equipment installed including Hunter wheel alignment machines as well as scissor lifts and all have the capability to service the largest LCVs and undertake MOTs on Class 4 and Class 7 vehicles.

Lambert said: "We can service, MOT and maintain all fleet vehicles, including prestige and premier marques, and have the technical ability in each of our Kwik Fit Plus centres to deal with the vast majority of mechanical issues. Additionally, the environment that we have created in reception areas equals, if not better, that found in volume dealerships.

"We learned a lot from our initial eight-centre pilot project and we will continue to adapt the concept as we receive feedback from the increasing number of fleets using the expanded network.

"We will continue to monitor business volumes at Kwik Fit Plus centres. But the expectation is that the size of the network will increase and outlets in other parts of the UK will be designated Kwik Fit Plus. We will also look at extending opening hours later into the evening to better cater for small businesses and sole traders."