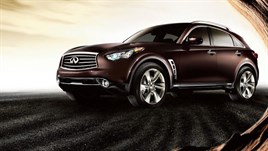 Infiniti will abandon the Renault-sourced V6 diesel engine used in its large cars in favour of Mercedes-Benz diesels in future.

Infiniti - part of the Renault Nissan Alliance - has an agreement with Mercedes-Benz parent company Daimler to share engines and platforms, and the new Q50 saloon was launched in the UK with a four-cylinder Mercedes-Benz diesel engine.

It will soon be offered with a 2.0-litre turbocharged petrol engine used on some Mercedes-Benz models.

Infiniti launched diesel engines in Europe in 2009, using a 3.0-litre V6 developed by Renault, which was competitive with rivals for power and performance, but was too thirsty and had high CO2 emissions.

Infiniti global president Johan de Nysschen told Fleet News that Infiniti has a global presence, but was still a relatively small player in Europe where diesel engines were in demand.

“Europe is the only market in the world that has a strong attraction to diesel,” he said. “We need diesel for success in Europe, but at this stage the level of investment for the volume we expect. It is far less costly for us to find a partner.

“We now have our alliance with Daimler and we have access to a great number of diesel engines that are appropriate for the premium segment, and that can reduce the cost of us entering that segment.”

Infiniti’s new compact car, to be launched in 2015 and built in Sunderland, uses the same platform as the Mercedes-Benz A-Class, and will compete in the same sector of the market.