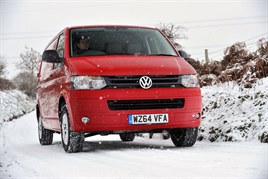 Although the latest statistics from the Department for Transport show that the number of accidents caused by slippery roads has fallen from 20,003 in 2010 to 9,595 in 2013, there is still concern that company car drivers could be putting themselves at risk.

As driving is an integral part of many professions and a large factor for many in getting to work, the RAC is urging drivers to be as prepared as possible if they need to drive in wintery conditions.

RAC Business Services director David Aldridge said: “Driving is a vital part of many people’s daily routines and in some cases people’s job – so it’s not always possible to down tools when the winter flurries begin. Clearly, driving in wintery conditions can be risky, so we would suggest taking special precautions and leaving yourself plenty of time to make a journey as you will need to take it slow.

“Our advice is to check local radio bulletins for news about local weather and road conditions and to make a common sense decision about whether it is appropriate to travel. If the conditions are dangerous and there is lots of snow or ice about then we would urge drivers to avoid non-essential journeys or delay their travel until conditions improve.”