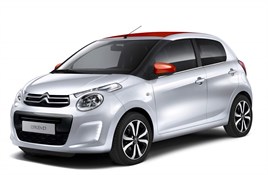 Citroën has taken the wraps off the second-generation C1 model ahead of its public debut at the Geneva Motor Show in March.

The model, which is based on the same platform and technology as the Toyota Aygo and Peugeot 108, offers improved efficiency, as well as the option of a more powerful 82hp variant over the standard 68hp engine.

The new Citroën C1 is available in three and five-door versions, as a hatchback or with a retractable soft-top roof called Airscape.

Automatic air conditioning is available for the first time, and the boot has grown to 196 litres with the rear seats in place.

Mirror Screen technology offers advanced connectivity. This function allows the motorist to copy smartphone content onto the seven-inch Touch Drive Interface for easy display and control. To do this, a data exchange app must be installed on the smartphone, before being plugged into the car’s USB port, compatibility permitting.

Once installed, the driver can take full advantage of the range of smartphone apps from the Touch Drive Interface.

A range of on-board technology makes driving easier such as a reversing camera, which projects images onto the Touch Drive Interface.

The new Citroën C1 also features hands-free entry and drive. This function lets the driver enter and start the car without taking out the electronic key.

Hill-start assist is also standard. This feature holds the car steady for two seconds for an easy re-start on slopes with a gradient of over 3%.

The e-VTi 68 Airdream engine mated to a five-speed gearbox and featuring top/start technology with a special aerodynamics pack, the C1 is on par with the best in class for fuel consumption.

The VTi 68 engine is available with the clutchless ETG. This five-speed gearbox features a creep function and optimised pedal mapping, adjusting power effectively for smoother start-ups and enhanced driveability.

The C1 is also available with the new VTi 82 from the PureTech engine family. The 1.2 litre three-cylinder 82hp petrol engine uses innovative technologies for fuel consumption of more than 60mpg and 99g/km CO2 emissions, combined with driveability and nimble performance – torque of 87lb-ft and 0-60mph acceleration in 11 seconds.