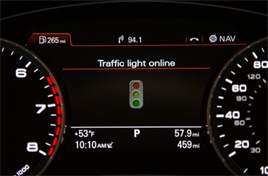 Audi Online traffic light information establishes an internet link between the car and the traffic light network via the central traffic computer in each town or city.

It quickly assimilates the automated traffic light change sequences in the vicinity, and on the approach to a set of lights, the Driver Information System (DIS) located in the central instrument cluster then shows the driver the speed to select in order to pass through the light during a green phase. It also displays a visual aid using red, amber or green icons.

If the driver is already waiting at a red light, Audi connect will calculate and count down the time remaining until the next green light is scheduled to appear via a timer on the DIS. The system also interacts with the car's Start-Stop function to ensure the engine is switched on five seconds before the green phase.

Audi has calculated that Online traffic light interaction has the potential to reduce CO2 emissions by up to 15 per cent, and could save approximately 900 million litres of fuel if it were to be deployed throughout Germany.