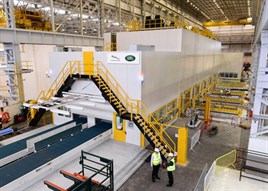 Jaguar Land Rover has invested £45m in a new servo press line at its Halewood Operations, near Liverpool.

The new Servo stamping line, the first of its kind to be built in the UK, is 13 metres tall and over 85 metres long. It has a combined press stamping capacity of 7,900 tonnes, making it the fastest and one of the biggest and most powerful press lines across Jaguar Land Rover, stamping both steel and aluminium panels.

Installing this giant facility required a major reconfiguration of the Halewood press shop, with the plant roof raised by almost 12 metresto accommodate the new machinery. The press shop bay also had to have its footprint extended by almost 50%, compared to the previous stamping machine.

Richard Else, Jaguar Land Rover, operations director at Halewood, said: “This colossal new press line reinforces Jaguar Land Rover’s long term investment in UK manufacturing. Halewood is one of the most flexible, advanced automotive manufacturing facilities in Europe, producing two of the highest quality, largest selling Jaguar Land Rover vehicles to over 170 countries world-wide. This investment ensures we can make more panels, even more efficiently and will continue to do so for many years to come.”

At the end of March, Aida, the premier global manufacturer of metal stamping presses, will complete the finishing-touches to the installation. Trial pressings will commence in April and the facility will begin stamping panels for use across Jaguar Land Rover from the Summer. By Autumn the facility will be up to full speed making up to 20 strikes per minute.

This servo press is the first of its type to be used by Jaguar Land Rover. Compared to the more mechanical operation of the existing Halewood presses, the direct drive servo system can handle higher tonnages in addition to working at higher speeds, allowing Halewood to increase the volume of stamped parts for use right across Jaguar Land Rover. The new line also uses less power and incorporates an energy recovery system that captures energy from the draw action and converts it into electricity.

Halewood Operations manufactures the Land Rover Freelander 2 and the Range Rover Evoque. The plant is operating at full capacity, 24 hours-a-day, for the first time in its 50 year history.