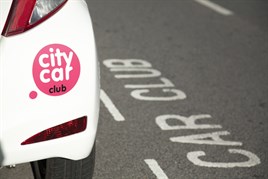 The Edinburgh Centre for Carbon Innovation has launched the first car club electric vehicle in Edinburgh, based at ECCI’s low carbon site in the city’s Old Town.

The car will be provided by City Car Club which has operated in Edinburgh since 2004.

Minister for Transport Keith Brown, who will officially launch the vehicle, will also announce two more years of funding for the Developing Car Clubs in Scotland programme – one of the major goals of which is to increase the number of shared electric vehicles across Scotland.

The Centre has partnered with the University of Edinburgh to install four electric vehicle charge points on site. The Centre will monitor the use and attitudes towards EV to inform and encourage a move to low carbon lifestyles among visitors, staff and students.

City Car Club managing director James Finlayson said: “Reducing carbon emissions is very much what City Car Club is about, so we’re extremely excited to be launching our first electric car in Edinburgh. We see this location at the ECCI and the University of Edinburgh as absolutely ideal for this venture and we’re confident it will go down well with the local community.”

Carplus chief executive Chas Ball said: “We welcome the continued commitment of Scottish Government to Carplus’s work in improving access to the network of shared vehicles operated by car clubs in Scotland. By increasing the proportion of ultra-low emission vehicles in the car club fleet, Scotland is taking another pioneering step in normalising shared use EVs in urban mobility.”

Transport Minister Keith Brown said: “I am encouraged that funding from the Developing Car Clubs in Scotland programme has allowed Edinburgh City Car Club to purchase its first electric vehicle. The Scottish Government is committed to encouraging more drivers to experience what it is like to drive an EV, and the introduction of EVs into car clubs is an excellent way to achieve this, as well as attracting new members to join.

“All the clubs offer a convenient, cost effective alternative to car ownership.  But in addition, car club members are more likely to walk and use public transport.  They are three times as likely to cycle on a regular basis than the national average.

“I’m pleased to announce further funding for the programme over the next two financial years of £745,000, which will allow it to expand into other communities and continue to increase the numbers of EVs available to members.”