Government earmarks £500 million to get more drivers into EVs 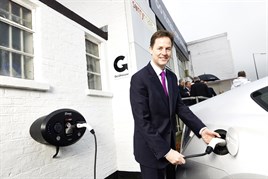 The Government will invest £500 million between 2015 and 2020 to help drive the adoption of ultra-low emission vehicles (ULEVs), the Deputy Prime Minister announced today.

The Plug-in Car Grant, which offers up to £5,000 towards the cost of qualifying ULEVs, will continue thanks to nearly half of the cash - £200 million – being earmarked for the scheme.

It will also spend £32 million on installing more rapid chargepoints that can charge a car in as little as 20 minutes.

The Government aims to have a rapid chargepoint at every motorway service station by the end of year, a network of 500 rapid chargers across the country by March 2015, and across the M and A road network by 2020 – to make the UK the best network in Europe.

In addition, local areas will have the opportunity to bid for a share of £35 million to become ‘Ultra Low Cities’ by submitting innovative and ambitious plans that encourage more consumers to use ULEVs.

Winning cities could, for example, incentivise drivers of green cars by letting them use bus lanes or allowing them to park for free.  There will also be additional funding of £50 million for local areas to invest in cleaner taxis and buses.

Finally, £100 million has been earmarked for research and development to cement the UK’s position as a leader in the development, design and manufacture of green vehicles.

The Deputy Prime Minister Nick Clegg said: “Our economy is growing thanks to sectors like our thriving automotive industry that are helping repair and rebalance the economy, building a fairer society for this generation and the next.

“The UK has the potential to emerge as a world leader in the development, design and manufacture of green vehicles.

“Owning an electric car is no longer a dream or an inconvenience. Manufacturers are turning to this new technology to help motorists make their everyday journeys green and clean.

“This major investment is there to make driving an electric car affordable, convenient, and free from anxiety about the battery running out. But it’s also about creating a culture change in our towns and cities so that driving a greener vehicle is a no-brainer for most drivers.”

The automotive sector is a success story of the UK’s economic recovery, with a new vehicle rolling off a UK production line every 20 seconds and the industry is worth £11.2 billion to the economy. The production of ULEVs is a major part of growth both now and for the future.

Mike Hawes, SMMT chief executive, said: “The move towards a low carbon vehicle future must be built around the three pillars of consumer incentives, strategically focused infrastructure and increased leverage for R&D support.

“We therefore welcome this announcement which reflects that balanced approach but, significantly, seek to incentivise technical developments in all segments of road transport, not just passenger cars.

“UK vehicle manufacturers are already committing significant investment to the UK’s ULEV ambitions through research, development and production of zero and low emission vehicles and technologies.

"This funding package will help secure additional private sector investment, but more needs to be done to support academic research in this area – as well as developing the skills that will be essential if the UK is to become a global leader in ultra-low emission technologies.”

To help interested drivers to find out more about what ULEVs could offer them, the Deputy Prime Minister launched the Go Ultra Low campaign in January.

Backed by five major car companies, Go Ultra Low provides clear answers about the vehicles and how to use and charge them.

In 2013, Government announced it would be speaking with industry, academics and other experts on how £500 million might be put to best use in helping this rapidly developing market pick up pace. Today’s announcement is the result of that consultation.

The Government is also working on other elements of support, including the support for hydrogen fuel cell vehicles and expect to publish further details later in the year.

Full details of each scheme will be published by autumn 2014, with some of the schemes opening for applications shortly thereafter.