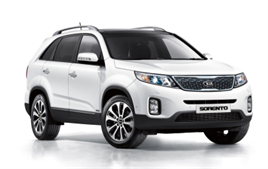 Kia is adding high-spec models across its line up, and making automatic transmission more widely available on the Picanto and Rio.

At the same time the Picanto ‘3’ and Rio ‘3’ offer the option of a four-speed automatic gearbox, that will appeal to buyers who spend substantial amounts of time in heavily trafficked urban areas.

The new addition to Kia’s larger SUV range still features the standard 2.2-litre CRDi turbodiesel engine common to the model with a CO2 figure of 178g/km.  But customers will benefit from the extra technology and luxury added to the car to meet increasing demands from customer for a higher specification. Parallel Park Assist automatically monitors parking spaces through 10 sensors and automatically operates the steering wheel to neatly park the vehicle in the available space. The memory seat function on the driver’s seat allows two users to have automatically set adjustment. Stylish 19-inch alloy wheels, rear side door sunshade blinds and a silver front mesh grille and chrome surround add identifiable touches to the Sorento’s road presence.  The Sorento ‘KX-4’ is priced at £36,495 and is in insurance group 22.

The pro_cee’d ‘SE Tech’ is the most lavishly equipped version of Kia’s European-designed, European-engineered and European-built three-door hatchback. It is available exclusively with a 1.6-litre 126bhp CRDi turbodiesel engine and six-speed manual gearbox, and is priced at £22,795.

The instrument cluster features a digital LCD colour display that graphically illustrates the chosen Flex Steer system mode and the operation of the PPAS. The font size can be enlarged if required and the display can be switched to kilometres per hour for European driving. The upgraded equipment is completed with an automatic parking brake that frees space in the premium centre console for a new sliding armrest and cup-holder. A Tyre Pressure Monitoring System is also standard.

The comfort and appearance are enhanced by an electric tilting and sliding sunroof and, for the first time in a Picanto, UV solar windshield glass to reduce glare and UV light in the cabin and privacy glass on the rear windows and tailgate.  Usually the preserve of larger and more luxurious vehicles, a heated steering wheel also makes the standard equipment list as does a smart key entry system and engine start/stop button.

The five-door Picanto ‘3’ Automatic is also powered by the 1.25-litre 84bhp petrol engine, producing 89 lb/ft torque at 4,000rpm, and is priced at £11,045. It is identically equipped to other Picanto ‘3’ variants, but features the four-speed automatic transmission previously available only on the three-door Picanto White and five-door Picanto ‘2’. In automatic form the Picanto ‘3’ is capable of 53.3mpg on the official combined cycle and has CO2 emissions of 125g/km. It accelerates from 0-60mph in 12.9 seconds, has a top speed of 101mph and is in insurance group 10.

The new top-of-the-range Rio ‘4’ adds to the existing ‘3’ specification with convenience touches including a smart key with engine start button, a power sliding and tilting sunroof, black leather upholstery and a heated steering wheel.

Rio ‘4’ is available in petrol and diesel engine variants. At £15,495 the 1.4 four-cylinder 107bhp petrol version features a six speed manual transmission, CO2 emissions of 124g/km and an insurance group of 9. The six-speed manual transmission, 89bhp 1.4 CRDi diesel variant produces 105 g/km of CO2 and is priced at £16,595 with an insurance group of 7.

The Rio ‘3’ Automatic is also available only as a five-door model, has a 107bhp 1.4-litre petrol engine producing 101lb/ft of torque at 4,200rpm and costs £15,100. Standard equipment matches that of other Rio ‘3’ versions, but with the deletion of the ISG engine stop/start system fitted to manual-gearbox models. Combined fuel economy is 44.1mpg, with CO2 emissions of 150g/km. The car accelerates from 0-60mph in 12.7 seconds and has a top speed of 105mph.  Previously, the four-speed automatic was offered only on the Rio ‘2’.