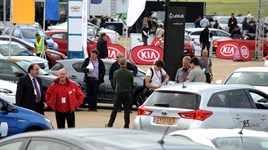 An incredible 13 models will be making their first appearance in the UK at this year’s Fleet News Company Car in Action event.

Jeep, Seat, Toyota, Peugeot, Mercedes-Benz, Fiat and Vauxhall have all confirmed show exclusives, adding to what was already a stellar line-up.

Overall, 25 manufacturer brands will be represented at the two-day, free-to-attend event, giving visitors the opportunity to test drive up to 300 models, unaccompanied around 50 miles of track.

But the promise of several premieres at this year’s show, which takes place on June 10 and 11 at Millbrook Proving Ground near Bedford, confirms CCIA as the UK’s premier driving event.

One manufacturer with an impressive four exclusives is promising to put the ‘action’ into this year’s CCIA by bringing the new Leon SC Cupra 280 along for visitors to try. It will make its debut alongside a five-door version and two power variants of the new Leon ST estate.

The Leon Cupra 280 is the most powerful production Seat ever made, and the car that recently broke a world record for a lap time around the famous Nürburgring Nordschleife – becoming the first front-wheel drive production car to lap the ring in less than eight minutes. It will certainly be in demand during the two-day event.

Meanwhile, Toyota’s all-new Aygo will get its first UK outing prior to its summer launch, giving fleet decision-makers the opportunity to experience its lighter, more frugal engine, which boasts emissions of just 95g/km.

The second-generation Toyota Aygo has been jointly developed alongside the new Peugeot 108 and Citroen C1, but they are far from carbon copies.

Visitors will be able to see for themselves as Peugeot will also be premiering two versions of the 108 on its stand.

Another UK premiere at this year’s CCIA will be the new Jeep Cherokee, which will initially be available with a choice of two 2.0-litre MultiJet 2 diesel engines – with 140bhp or 170bhp power outputs.

Visitors to the show will be amongst the first people to be able to put the 139g/km version through its paces.

The new, fifth-generation C-Class represents a giant leap forward – according to Mercedes-Benz, but visitors to this year’s show will be able to judge for themselves.

However, they will not only be able to test drive the latest cars from the UK’s leading manufacturers, CCIA will once again have a range of LCVs for fleet decision-makers to put through their paces.

Recognising many fleet operators have mixed fleets, CCIA 2014 will have a selection of commercial vehicles available to drive from the UK’s leading van manufacturers.

But two vans that will be guaranteed to cause a stir will by Fiat Ducato and Vauxhall Vivaro – both of which will also be making their UK premiers.

It all adds-up to the biggest and best ever arrive and drive event the UK has ever seen, featuring the country’s leading manufacturers and hundreds of vehicles to drive.

And, when not enjoying the 50 miles of test track, visitors will be able to explore the additional services being featured in the CCIA exhibition hall, two thought-provoking seminars on grey fleet management and the impact of DVLA changes to driving licences and tax discs.

There is also an EV/hybrid zone, while the latest life-saving gadgets will be demonstrated in at ‘Driver Technology in Action’ within the Millbrook facility

Fleet News editor-in-chief Stephen Briers said: “If you’re involved in fleet you need to be at Company Car in Action 2014.

“CCIA not only gives you unrivalled access to test drive hundreds of models, it also offers fleet decision-makers the opportunity to talk to key manufacturers, debate key fleet issues and keep abreast of the latest technological developments.”

For more information about Company Car in Action 2014 and to register you attendance, visit www.companycarinaction.com.