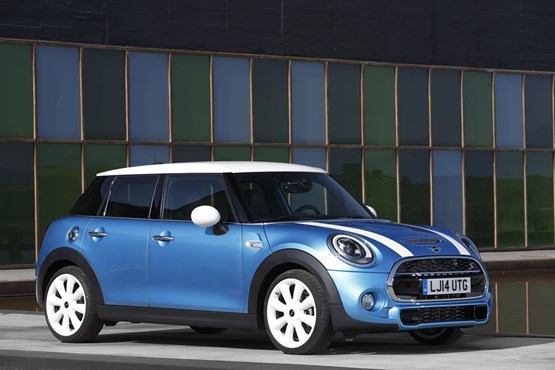 Mini has confirmed a five-door version of its hatchback model will go on sale later this year.

It's the first time the hatchback has been offered with two rear passenger doors, and features an extended wheelbase compared with the three-door hatchback.

The new model offers an additional 15mm of headroom, while the car's interior width at elbow height also increases by 61mm. The boot has a volume of 278 litres, up 67 litres or around 30% compared to the three-door hatch.

This makes the five-door hatch 161mm longer and 11mm taller than the three-door.

At the UK launch of the Mini five-door hatch, the new Cooper D offers combined fuel economy of 78.5 mpg while CO2 emissions start from 95 g/km.

A Mini Cooper SD 5-door Hatch is offered for the first time in the third-generation Mini hatch with a new 2.0-litre four-cylinder diesel power unit that has an output of 170hp. The new engine offers a 0-62 time of 7.4 seconds, and fuel of 68.9 mpg on the combined cycle.

Using a rotary switch at the base of the gearstick or selector lever, drivers can swap from the default 'mid' mode to either 'sport' or 'green'. The three choices offer a set-up which is either performance-oriented, comfortable and well-balanced or geared towards fuel efficiency.

Mini Driving Modes also influences the ambient lighting, shift characteristics of the automatic transmission and the variable damper control if the option is selected.

The five-door comes with a six-speed manual transmission as standard featuring rev matching on downward shifts. A six-speed automatic transmission is available as an option on each engine.

Both transmission systems were newly developed for the third-generation car. The automatic features an engine start/stop function, preventing unnecessary fuel consumption. When used in conjunction with the Mini Navigation System, it's able to take account of the selected route profile and control gear shifts.

Based on navigation data, the appropriate drive position is selected to match the road ahead, preventing unnecessary upshifts.

On the Cooper S and Cooper SD, a six-speed sports automatic transmission is available which enables even shorter shift times, featuring rev matching on downward shifts and can be operated in manual mode using shift paddles behind the steering wheel.

Standard fuel-saving features includes a shift-point display function and optimised preheating process on the diesels. Brake energy recuperation and need-oriented control of the fuel pump, coolant pump and other ancillary units feature on all models.

The electromechanical power steering and map-controlled oil pumps in all engines are optimised for the most efficient use. An optimised preheating process achieves approximately 50% reduction in the energy required to start the diesel engines.

Other options include Park Distance Control, electrically heated and folding exterior mirrors, and both interior and exterior mirrors with automatic anti-dazzle function.

MiniConnected or Mini Connected XL is also available in conjunction with the Mini Visual Boost Radio and the Mini Navigation System. It offers extensive integration of smartphones inside the car, enabling the use of internet-based services in the areas of infotainment, communication and driver experience. This functionality is provided via a number of apps which are downloaded to a connected smartphone.

The new Mini five-door hatch range starts at £15,900 OTR. There is a modest model-for-model price increase of £600 compared to its three-door sibling.