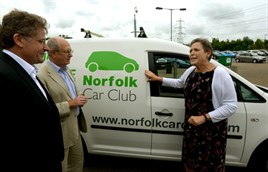 Baroness Kramer has announced a new car club development fund, to be administered by Carplus to help expand access to car clubs in England.

“Car clubs are well established in London and are showing strong growth in some other cities. They have demonstrated a strong track record in reducing CO2 emissions and improving air quality. This is an exciting opportunity to expand this success and establish and grow car clubs in towns, cities and rural areas across in England.” said Chas Ball, chief executive of Carplus, welcoming the announcement.

Carplus, the environmental transport NGO that promotes accessible and low-carbon alternatives to traditional car use in the UK, will manage this new fund.

This project will fund three demonstration projects in England to:

The three projects will be delivered in three different towns, cities or areas.

In addition, Carplus will manage a Car Club Challenge Fund providing smaller grants to help kickstart or expand projects in small towns and rural areas. It will also fund projects that aim to improve integration between car clubs and other ‘shared mobility’ modes of transport like bike sharing as well as public transport.