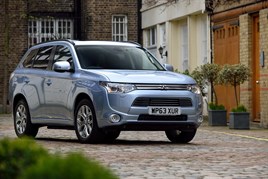 A Mitsubishi dealership in Coventry has sold 27 new plug-in hybrid vehicles since they launched the vehicle in early June.

Darren Clarke, sales manager at Oak Tree Garages, says the arrival of the plug-in hybrid 4x4 SUV has caused a stir with plenty of interest in the car, thanks in part to the scheme that offers match-funding to businesses and public sector partners to install electric vehicle charging points.

The Plugged-in Places programme, supported by the Office for Low Emission Vehicles (OLEV), has been instrumental in supporting the uptake of ultra-low emission vehicles in the UK.

The Midlands is one of the eight places which has benefitted from funding, along with Milton Keynes, London, north east England, Greater Manchester, east England, Scotland and Northern Ireland.

Clarke said: “We’ve had a good mixture of interest and a large portion has been company car buyers who are interested because of the huge tax advantages.

“We’ve also people who are keen on the green credentials and the technology in the car. It’s great because it appeals to a lot of people.”

The Outlander PHEV meets the criteria needed to qualify for the Government’s Plug-in Car Grant for ultra-low emission vehicles, and prices range from £28,249 to £34,999 (post-grant).