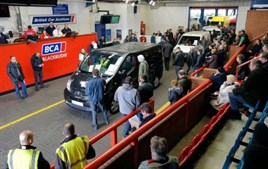 BCA is reporting a strong second quarter of 2014 in the used commercial vehicle sector.

Average values for commercial vehicles continue to rise, as Quarter 2 2014 posted the highest headline figure on record according to BCA's latest figures.

Longer term value growth in the used LCV sector can be seen when comparing 2014 to 2012.  Average values have risen by £1,181 (27.5%) over the 24 month period as the shortage of good quality stock continues and demand increases as economic conditions improve.

BCA's general manager of commercial vehicles, Duncan Ward, said: "There can be little doubt that the improving economic background is giving a boost to the used LCV market, and small and medium-sized enterprises (SMEs) remain positive about future prospects.

“News of massive infrastructure projects such as HS2 which will generate thousands of construction jobs, as well as numerous A-road improvement schemes and house building projects will do much to improve confidence in small businesses serving the civil engineering and construction industries.

“The building and associated trades are some the biggest buyers of used LCVs, so we should expect demand to remain relatively strong in the months ahead.

"Additionally, the continued growth in online shopping and home delivery services has created another layer of demand for used panel vans, which is keeping values firm.

"The market was generally strong across the second quarter of 2014 with record average monthly values being set across the board in May.  However, volumes rose noticeably over the period, offering more choice for buyers and introducing some pressure on conversion rates, particularly in April.

“Buyers particularly like any vehicle with a good useable specification or specialist equipment and there is always demand for Lutons, dropsides and tippers."