Audi to focus on diesel technology to reduce CO2 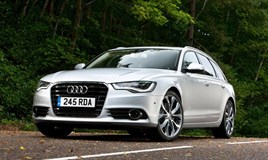 Alternative power is set to find its way under the bonnets of an increasing number of Audi models in the next few years.

But the quest to perfect more environmentally-friendly transport is unlikely to have little impact on the continuing process to maintain the German company’s prominence in diesel technology.

“It is right that we should be making intensive investigations into the power solutions that involve hybrid, electric and hydrogen fuel cell, but we are still addressing diesel technology in depth,” board member and technical development chief Dr Ulrich Hackenberg told Fleet News.

“Diesel will play an important part in the future of transport because there is no doubt that it fuels the most efficient internal combustion engines.

“Compared with our first unit in the Audi 100, power and torque have risen by more than 100% relative to displacement, while pollutant emissions have fallen by 98%.

“TDI is a major reason why we have been able to reduce average CO2 emissions of our EU new vehicle fleet by 3% per year in recent years.

“Make no mistake, diesel has a bright future. The latest study tells us that there are 750 million cars in the world and that by 2030 the total will be three billion.

“At that time, around 40% of all registered new vehicles will be electrified and almost two-thirds will be hybrid. That means that more than 80% will still be making use of internal combustion power,” he said.

Hackenberg claimed Audi is now reaping the benefits of decades of development in diesel and went on: “Our money is still on TDI – it remains one of our core values.

“Improvements in weight optimisation, rolling resistance and aerodynamics will help the Group achieve 20% of the 95g/km fleet emissions target by 2020. Another 30% will come from alternative drive systems such as natural gas, plug-in hybrids and fully-electric drive.

“The remaining 50% reduction will come from fully utilising the potential of our combustion engines and the key words here are friction reduction, efficient thermal management and optimised combustion.”

Since 1989, Audi has fitted 7.5 million TDI engines to its cars, two million of them in the 2.0-litre category.

The next benchmark in TDI performance and efficiency will be set by a 3.0-litre engine.

To be launched in November in a restyled A7 Sportback Ultra model, the completely-reworked V6 will deliver a class-leading 221hp.

The model is also promising a potential 60mpg and CO2 emissions of 122g/km to give Audi the edge against rival models from Mercedes-Benz and BMW.

Significantly, the new TDI engine will also be streamed with E-tron hybrid power by the end of this year in a package that will deliver a claimed a combined output of more than 370hp and a battery range of more than 30 miles.

“We’re no longer able to take big jumps in efficiency with the introduction of single features,” said Hackenberg.

“Recuperation has become our key word and we now concentrate on making as many relatively minor gains as we can to add up to worthwhile improvements.”

He added: “Instead of downsizing, our focus is now on rightsizing – we’re aiming to offer the right engine size for the respective size of car.

“We want to offer a tailored solution for every customer and requirement, up to and including a TDI with plug-in hybrid technology,”

Currently, 58 of Audi’s TDI models have CO2 emissions of between 85g/km and 120g/km and, by the end of the year, 23 cars will carry the firm’s Ultra badge to symbolise their high efficiency.

This number will rise dramatically as the Ultra product range is due to increase from its present total of 49 to 60 over the next five years.

Many of the cars will include technologies developed for the new 3.0-litre engine, which features a supplemental electric compressor to provide an instant flow of turbo power at low engine speeds.

“Our development engineers have unique expertise and many years of experience – and we are not standing still,” said Hackenberg.