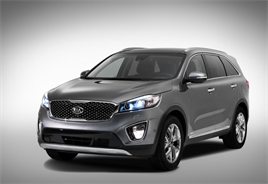 Kia's new Sorento is set to include a higher level of sophistication, as well as more space.

The evolutionary styling changes subtly alter the character of the new Sorento, highlighting its profile, creating a sophisticated appearance and ensuring the new model has a bolder on-the-road presence.

The exterior styling of the new car was led by Kia’s Namyang design studio in Korea, with significant input from the brand’s Frankfurt and California design studios.

One of the most distinctive interior styling features is the Swiss watch-inspired center-console, which incorporates Kia’s latest HMI (human-machine interface) technologies.

The increased exterior dimensions and the extended wheelbase (+80 mm to 2,780 mm) have liberated additional space in the cabin of the new car.

In Europe, the car will be available with a choice of 2.2-litre turbo-diesel and 2.4-litre GDI engines.